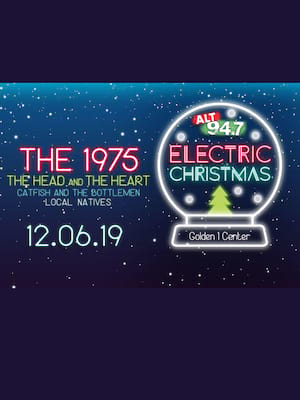 Matty Healy cuts a charismatic figure, at once practised pop star and overexcited kid, fronting a band at the peak of their career

Blast Away The Winter Blues This Christmas

Move aside Sugar Plum Fairy, Alt 97.4's annual Electric Christmas holiday concert is back for another year of rocking, rolling and unorthodox Yuletide celebrations. Hailing from Manchester, headliners The 1975 are an English pop rock outfit lead by indie heartthrob Matt Healy. Riding high in the 2010s thanks to their artistic yet undeniably mainstream pop appeal, the group are preparing to release their hotly anticipated fourth studio album Notes on a Conditional Form in February 2020.

The 1975 share the stage with Welsh rockers Catfish and The Bottlemen, the quartet behind smash hit indie singles Homesick, Rango and Kathleen. Rabble-rousers to their core, the hard rocking, hard partying band are known for their explosive live concerts featuring human pyramids, flares and bouncing beach balls. If that wasn't enough, Californian alt pop quintet Local Natives round off the bill.

Sound good to you? Share this page on social media and let your friends know about Electric Christmas at Golden 1 Center.