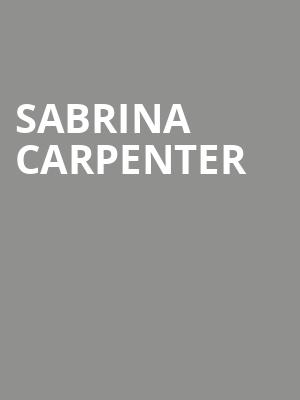 Sabrina Carpenter extends her Emails I Can't Send tour into 2023!

Singer-songwriter Sabrina Carpenter is hitting the road once again on the second leg of her Emails I Can't Send tour! The tour, which kicked off in 2022, came in support of her recently released album of the same name. There's no slowing her down as she quickly races to stardom, so make sure you catch her when she comes to town!

Placing third in The Next Miley Cyrus Project, this multi-talented young woman first came to prominence for her role as a younger version of Chloe Goodman in Fox's 2013 The Goodwin Games, before headlining Disney Channe's Girl Meets World. as Maya Hart. Having signed to Hollywood Records, Carpenter has already released a steady output of albums, with her first EP in 2014, Can't Blame a Girl for Trying before dropping her first two full-length works Eyes Wide Open in 2015, followed swiftly by Evolution in 2016.

You may be required to wear a mask during this performance. Please contact the venue directly for more information.

Sound good to you? Share this page on social media and let your friends know about Sabrina Carpenter at Hard Rock Live Sacramento.