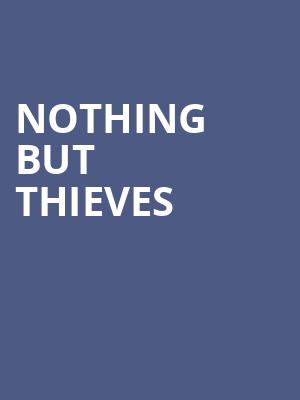 ...it is Mason's shapeshifting voice that binds everything together, whether he is barking out a proto-rap on the Daily Mail-baiting Live Like Animals, or casually high-jumping into falsetto over the brooding bassline of Trip Switch.

Why See Nothing But Thieves?

Nothing But Thieves on tour!

In 2012, alt rock quintet Nothing But Thieves burst out of the sleepy climes of Southend, England with a bold new pop-tinged indie sound that quickly won over critics and fans alike. After a series of attention-grabbing EP's, the band released their self-titled debut in 2015 to much anticipation, garnering over 174 million streams to date. Just a year after the release of their sophomore effort Broken Machine, the band is back and hitting the road with fresh new material and fan favorites!

Nothing But Thieves is set to return on fine form in a whirlwind of gritty guitar riffs and frontman Conor Mason's soaring, almost operatic vocals. Fusing shades of Muse and Radiohead, the talented outfit churns out melodically-driven, driving anthems that make for arresting and emotionally invested-live performances, with their varying influences tied together by Mason's distinctive howl.

Seen Nothing But Thieves? Loved it? Hated it?

Sound good to you? Share this page on social media and let your friends know about Nothing But Thieves at Ace of Spades.